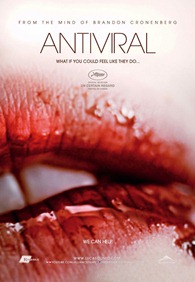 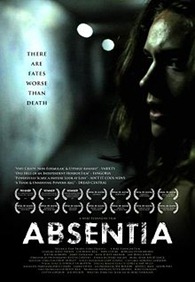 David Cronenberg’s son, Brandon, has clearly inherited his father’s penchant for body horror as his impressive debut Antiviral, a sneaky, low budget, high concept scifi flick positively glistens with creepy, twisted fleshiness. Working as a vendor of celebrity infections, our protagonist decides to scoop the competition and takes drastic measures to secure the mysterious affliction that’s struck down a beautiful young starlet. Cronenberg sketches out a nicely jaded dystopia where science has become a slave to the pernicious cult of celebrity and the quiet pacing and performances underpin it’s increasingly unsettling atmosphere. As Pops Cronenberg drifts more and more into mainstream features it’s a relief someone in the family is keeping up the tradition of squirming squeamishness.

Although Absentia doesn’t manage it’s budget quite as well as Antiviral it’s still manages a mouldering atmosphere of weirdness that lifts it above the average horror/thriller. After 7 years, a young wife is about to declare her missing husband dead and enlists her wayward sister to help tie up things only for the husband to crawl through the front door rambling incoherently about a close to home kidnapper. The script is a little thin at times and the production a bit low fi but the plot’s menace and weirdness are developed nicely as the character’s emotional churning soon blossoms into a sticky miasma of dread and confusion. A solid, interesting little chiller that’s worth a look and shows that Kickstarter funding might be a viable option for cash starved film makers.