Here's another reason Ben Goldacre should be better known - I've been prattling on about his Bad Science and Brooker's Screen Burn for ages and though Brooker has reached the giddy heights of Telebox stardom Goldacre has remained quietly pointing out the daily idiocy we're fed as science in the media and with latest work the tragic consequences that can follow from blindly following people who appear to be scientific authorities.

After studying with the Koestler unit my scepticism grew and grew and then after 6 years selling books to the MBS market I'm now a card carrying atheist hard science type, suppose it was books like The Healing Power of Seashells that did it that and of course the mad as hell customers. Maybe I can stray a bit further at times - can you be a miltant rationalist ? Do we really have to suffer Dangerous Fools ? When a man says vitamins can cure AIDS and hundreds of thousands die as a result doesn't that say something about how we monitor those claiming scientific credentials? and doesn't the scientific community, the majority of intelligent reasonable individuals realise that they need to stand up and fight these morons-that-make-me-angry-bad?
Posted by Doc.Dunce at 00:57 No comments:

Gotta love IO9.com - one of my favourite sites. Well here's a link to an awesome post about some freaky visuals made by some guys who sit about thinking about descending into a black hole.

If you're having a look you should check out a couple of the other Gawkermedia sites like Kotaku or Lifehacker. Also very good.
Posted by Doc.Dunce at 17:08 No comments:

Sorry got a bit "sleepy" last night so couldn't finish my reviews.

Dead Snow, the Norwegian Nazi-Zombie flick has plenty of action, blood, guts and is a great laugh to boot. Obviously inspired by Shaun of the Dead I'd say this is probably the most successful horror/comedy since then and certainly a much better effort than Black Sheep etc

Well hyped in advance I felt little let down by The Baader Meinhof Complex - the true story of the Red Army Faction's terrorist activities in 1970's Germany. It's a very well made, if overlong thriller, with an excellent cast. Maybe it was sharing a flat years ago with a real proper Scottish Leftie that jaded me to the whole thing but I've got little sympathy for these people and I think I'd have preferred the story told from the investigating authorities rather than listen to their revolutionary drivel throughout. Must be getting rightwing in my old age.

Ahh this is more like it ! some rubbish 80's scifi - Leviathon - came out the same year as The Abyss and was overshadowed, rightly, by the Cameron spectacular. Basically an Alien ripoff other than Peter Weller this doesn't really have much to recommend it. Only for aficionados of 80's SciFi.

I always thought Barry Levinson's Wag The Dog was underappreciated but after watching What Just Happened I'm thinking that he just can't quite do comedies. DeNiro plays a troubled Hollywood producer dealing with ex-wives, kids and moronic celebrities. Maybe I missed some of the finer satirical swipes but ultimately there just wasn't enough laughs.

Poor old Heroes, just how much further can they jump the shark? I really liked this show initially but we've seen so many unpredictable changes in characters, plotholes of cosmic size and way too much faffing around since then it's almost stripped me of my interest. Anyways the Heroes Finale
didn't buck the trend - Sylar "becomes" Nathan, Hiro can't use his powers and the Ice Maiden is back. Sigh... It could've been so much better.

A made for TV thingy, Impact, is a bit of guff. A massive asteroid hits the moon and sends the moon circling towards us - cue cheapo sfx and a hokey plot about fixing the problem. Bad scripting and average acting mean I was bored bored bored. Little more than a rehash of Armageddon or Deep Impact this could have at least made an effort to bring a new slant to the Earth-In-Peril genre.

My friends have been hassling me to watch Sarah Silverman Show for ages - well I've started and I guess it's okay, there was a few laughs in each episode but the second series better get funnier. Not so keen on comedy & singing shows unless its the Flight of The Conchords and I found Silvermans songs pretty tedious. Maybe it's the tiresome, self centred character Silverman plays onscreen but I found myself preferring her co-stars to the main event.
Posted by Doc.Dunce at 16:24 No comments:

Urgh should've posted earlier anyways I was off work for a few days so alongside the usual diet of Office, Supernatural, Fringe, Lost etc etc I managed to watch The Burrowers - gets a fairly harsh score on IMDB but I enjoyed it, a western horror movie doesn't come along very often and this was a reasonably modest, intelligent-for-Hollywood, film that made an effort with it's characters and built towards the action/nasty rather than just shove it in your face.

Session 9, another low budget film thats been nagging me to watch it for a while now finally got it''s wish and it was pretty good. Bit of the old haunted house rehash but a decent script and competent actors make this worth a watch. Funny seeing Peter Mullan in this, great actor, but it made me think about films and famous actors - no doubt that given more money the pproduction would hae gone with bigger actors but it's the good work by a face that isn't one of Stoopid Hollywood's same 20 actors/actresses, stories are better told when the protagonist doesn't remind of you of other, older stories. It's not so much that new is good cause there's always Shia Leboof I just think that the movies with these tired old faces are already sunk to me. Whatever that might mean.

I was quite looking forward to watching Trouble The Water as I loved When the Levees.. by Spike Lee but to be honest I was a little disappointed, sure it was good and a very honest, open account of life before, during and after Hurricane Katrina. My problem is simply I was a little underwhelmed by the footage they'd taken maybe I'm just an ambulance chasing thrill seeker.

Will have to finish the rest tomorrow
Posted by Doc.Dunce at 01:31 No comments:

Been a slow week in terms of viewing. I was asked by a perturbed customer to watch "The Obama Deception" Alex Jones' latest tirade against mainstream US politics. I assured my customer that it was his usual parade of half-truths, poor arguments and conspiracy babble. God knows at one point in my life I'd have probably given him more credence but at 33 I'm too old to be chasing phantoms.

I also saw the pilot episode of the Battlestar G. spinoff - Caprica - it was ok, a little too much like the OC but as long as it keeps feeding us background to the events of the main arc I think I'll keep watching. It's set up as a prequel and seems to be focussed on two families the Adamas and the Graystones. Lots of smoking and not enough half built Cylons but we'll see how it develops. 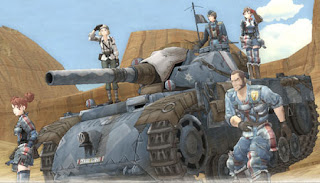 I've started watching a couple of new animes this week - the remake of Full Metal Alchemist which at least seems as good as the original and is apparently much closer to the manga. And the anime adaptation of Valkyria Chronicles. I started the PS3 game of Chronicles before Xmas and it was pretty sweet but got sidetracked into Fallout 3 but the anime is pulling me back into this beautiful, tactical based reimagining of WW2. Well worth your pennies.
Posted by Doc.Dunce at 17:26 No comments:

Er some small screen stuff this time around. Well watched the Damages season two finale the other night and it didn't disappoint. I'd never have thought such a over-dramatic, convoluted legal drama could hook me in but by the end of the episode I was hankering for the first episode of next season. Guess it's the excellent performances from Close, Byrne and Donovan.

Mos Def is on House! Don't mind his early music but I'm not really convinced about Mos as an actor. I'm surprised I'm still watching this show given I'm fairly squemish but Hugh Laurie is always worth a watch. Anyways I amost turned this off after 5 mins as I aint too keen on the whole P.O.V set up but in the end it turned into quite a good episode. At least they kept clear of the tedious bi-sexual-with-Huntingdons character who should be fired out of a cannon next week cause she's guff.

Oh lordy South Park's last episode Eat, Pray, Queef was somehow really funny and really crap. After a string of excellent episodes they seem to have coasted through this one relying on the same gag throughout the entire ep - nevertheless I it still made me laugh. Girlfriend wasn't impressed though.

I'm a big fan of Charlie Brooker ever since his crazy book TV Go Home came out. His weekly column in the Guardian Guide magazine has in the past made me choke, spurt and snort with laughter on more than one occasion. The unfairly derided Nathan Barley TV show was brutal but a pitch perfect satire of London idiots and their wiley ways. Anyways now Brooker is back with a spinoff from his Screenwipe show called Newswipe. It's about time someone started slinging the muck at the increasingly rubbish TV news we have in this country: endlessly repeating the same 5 news stories all day, cutting to live feeds with nothing to show, prattling on about vacous celebrities for days on end, promoting their own shows and products under the thin veil of news and frankly just not reporting what's actually happening across the world. It's a shame but now I'm forced to flick betweeen CNN International, Sky News and BBC24 to keep abreast of world events and even then I need topping up with stuff like this. Anyways Brooker's show is very good so far and I hope he can build it into something bigger maybe even put him on BBC1? As it's the Beeb you can watch it yourself here

I'm about halfway through the classic documnetary series World At War - this really should be made compulsory viewing for our schoolkids. With some truly astonishing archive footage and plenty of important talking heads contributing this is one you should really make an effort to watch. In a similar vein I'd recommend the slightly nutty Ascent of Man - an ambitious history of mankinds intellectual development this 1970's British documentary series covers pretty much every important scientific discovery and is beautifully narrated by the idiosyncratic Jacob Bronowski. I've referred to it as nutty as there are sequences of footage interspersed throughout that are indulgent, trippy and kinda poetic i guess - ah if only documentarians were given the freedom these days. Up next for me will be Jazz.
Posted by Doc.Dunce at 15:57 No comments: