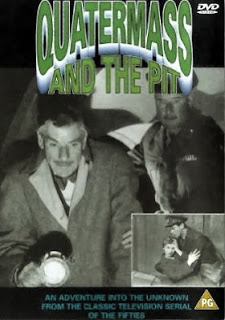 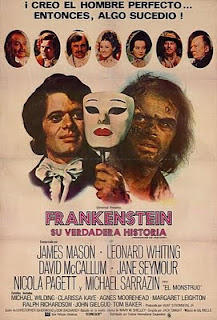 Quatermass and the Pit was broadcast live for the Beeb in 1958 and it's a glorious slice of vintage speculation that reeks of it's era and has a wonderfully British sense of understatement. Professor Quatermass, stiff lipped maverick scientist, fresh from a row at the War Office, is dragged to a building site turned archaeological dig that's unearthed a mysterious craft in a 5 million year old strata with some curious alien corpses inside. Despite the amusingly dated styling and script there's plenty of vigour in the plot and a few wisps of genuine atmosphere as the well mannered team find themselves besieged by incomprehensible forces. This is brilliant stuff but something that's probably only going to appeal to fans of retro scifi.

Frankenstein: The True Story is a reasonable, if mis-titled, TV mini-series version of the classic horror. I was expecting some sort of psychological retelling of the man-made monster but it's quite plain interweaving of the original with the sequel The Bride of... . When the naive Dr assists a demented colleague and inherits his life giving experiments his first bash slowly turns into a disaster and he's offered a second go, this time with lady bits, but it quite unsurprisingly it all ends in tears. The production is decent and the talents of James Mason and David MacCallum assist with proceedings so although I was a little disappointed with the unimaginative retelling it was still an entertaining 3hrs of vintage scifi.