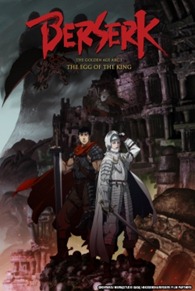 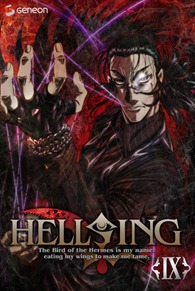 It's been a while since I've dipped into anime, mainly due to it's preoccupation with giant robots and panty shots, but the recent OVA reworking Berserk: Golden Age is showing in a local cinema so I'd thought I'd give it a go. Set in a medieval-ish era, Berserk follows the career of a single minded mercenary called Guts and his bloody travails in search of vengeance. The animation is a distinct improvement on it's 80's predecessor and surprisingly it’s retained it’s commitment to violence and viscera however the story, squashed as it is, lacks much of the finesse of the original leaving me to wonder what viewers unfamiliar with the story will make of it.

Alucard is under the kosh at the start of Hellsing Ultimate Ep. 9, the latest in the reworking of the vampiric anime/manga but it's not long before he dusts himself off and scrapes the streets of London with his enemies entrails. This OVA retelling doesn't quite seem to tickle me like the original series did maybe it's the feverish animation, the thinned out, hyperbolic characters or the Nazi-Vamp Zeppelin invasion storyline I dunno, it does have some merits however with a rich smorgasbord of gore and a bucketful of attitude.
Posted by Doc.Dunce at 22:06