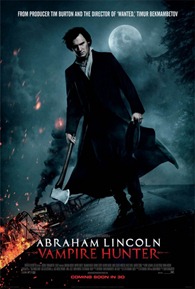 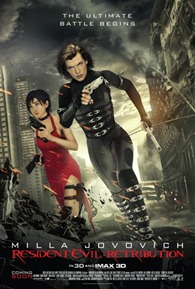 Sometimes even I am surprised by the lazy, craptaculars that get churned out by Hollywood machine these days but Abraham Lincoln Vampire Hunter was quite astonishing in it’s vacant, soulless idiocy. Retelling the story of an American hero with some fang action thrown in probably seemed a good idea on paper but it’s a pitiful, by the numbers plotted pile of steaming dung that has literally no redeeming merits and will no doubt be an endless source of embarrassment for the director Bekmambetov, producer Burton and the talented cast including Brits Sewell and Cooper. Avoid.

Resident Evil: Retribution is a similarly crummy action flick with Jovovich and Anderson seemingly deluded into thinking that there’s mileage left in this weary franchise. Seguing directly from the 4th the action starts with Alice rescued/kidnapped from the wreckage of aircraft carrier by the Umbrella Corp and her subsequent monster stomping escape. Paper thin characters stumble through predictable set pieces with the usual fan favourite critters making intermittent appearances and though I’ve nothing against the games or some of the earlier film efforts this is a complete waste of celluloid that’s neither scary, thrilling, inventive nor even that grisly