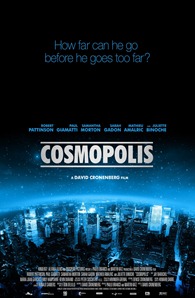 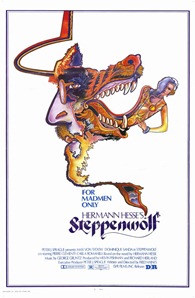 Cronenberg’s shiny/grimy adaptation of Cosmopolis (a sharp knife in the shallow guts of 21st Mammonism) retains some of it’s edge despite the uneven performance from Twilight Pattison. The film follows the book quite closely with most of the billionaire-on-the-brink’s varied antics included during his slow limo crawl across a gridlocked city and I’m sure there’s a fair bit of dialogue lifted too but there’s not enough time to give either their significance. It’s a fine looking film and there’s still plenty of smarts behind it’s gleeful, grim comedy so it’s worth catching but I’d recommend the novella first.

Another thought provoking, nuanced novel, Steppenwolf, got a big screen version back in 1974 and although good, similarly lacks the depths of the original. Max von Sydow stars as the melancholic scholar who, adrift after WW1, finds his mind and life lifted by an unusual jazz loving woman oh and lots of drugs and esoterica. The acting is excellent, the production not so much, peppered unnecessarily with some dated, gimmicky animations and sfx . Still there’s an effectively dreamy, dissolute weirdness that pervades proceedings and like Cosmopolis plenty of the big thoughts are intact.