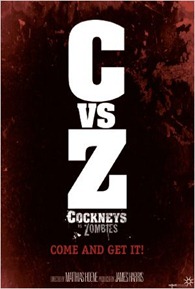 Brit horror/comedy Cockneys vs Zombies is as basic as the title suggest and it’s best bits are crammed into it’s trailer sbut it sill managed to raise a chuckle or two. Builders pop a sealed tomb and inadvertently unleash a zombie outbreak on the East End sending a bunch of bungling bank robbers battling across town to rescue their Grandad who's holed up in a scheduled-for-demolition old folks home. There’s a few nice chompy bits but the stronger, better acted and funnier OAP's segments are secondary to a predictable and cliched main story that has little imagination or charm. Half decent.

British 80's cult horror, Xtro, is just as flawed but at least has the decency to be quite, quite bonkers. When a UFO buzzes a remote cottage and abducts a middle class dad his traumatised son grows up with his mum and her yank boyfriend. When hubby strolls back into their lives a few years later, seemingly sans memories but with extra odd, his presence seems to unlock strange abilities in the kid and a merry, icky rampage is excreted. This is low budget stuff that's badly shot and poorly scripted/acted but it does mine a thick vein of gooey, quite repugnant body horror that's interspersed with some genuinely barmy deaths.
Posted by Doc.Dunce at 23:58