Oliver Stone’s latest offering is a 10 part documentary called The Untold History of the United States. Covering the self styled ‘Amurican Century’ Stone weaves a somewhat supercilious narrative in and around the significant events of his country’s ascendance into it’s current militaristic and materialistic hegemony. It’s competently put together and does a decent enough job I suppose but it’s hardly Untold, occasionally simplistic and progressively less factual. Hats off to Stone for giving it a bash though as it’s a bold and brave thing to attempt and you never know it might even spark some navel gazing in the average Yank viewer. 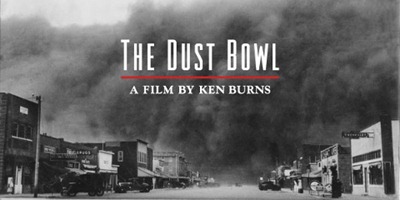 Ken Burns' is considerably more talented documentarian and his latest, elegiac documentary The Dust Bowl provides ample evidence. A decade of drought and the ravenous agricultural expansion throughout the prairie lands of 30’s America led to a devastating, quite unfathomable series of dust storms that frequently blotted out the sun, eclipsing towns and even cities and impoverishing a generation of Yank farmers. Over the 4 hours Burns slowly charts the devastation and desperation this tragedy caused relying heavily on some rather moving testimony from a the few remaining witnesses to colour his austere cinematography and archival sources.