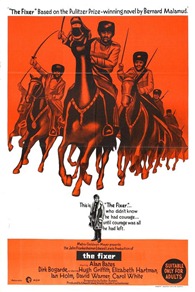 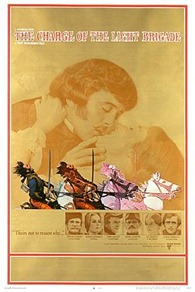 Alan Bates puts in a powerful performance as an unjustly imprisoned Jewish handyman clinging to his principles in The Fixer directed by John Frankenheimer and loosely based on the infamous Beilis trial. Anti-Semitism was rife in Tsarist Russia, so when a boy turns up murdered it’s easy for the locals and authorities to blame a nearby Jew but they didn’t count on his tenacious refusal to confess despite their brutal, merciless treatment. Bates is ably supported by Dirk Bogarde and Ian Holm but they pale way into the background as Bates rounds out the razor sharp script out with a perfectly pitched portrayal of a man driven to despair and beyond.

Tony Richardson scorched the screen in ‘68 with his savagely satirical The Charge of the Light Brigade. Targeted squarely at the idiocy of the Victorian upper class twits behind the planning and execution of the Battle of Balaclava, the film follows a young officer, played by David Hemmings, who fails to talk sense into his superiors and suffers a miserable end along with the rest of the troops. Trevor Howard, Vanessa Redgrave and John Gielgud bring plenty of colour to the smaller roles and Richardson’s deft direction balances the tragic and comic beautifully. An underrated classic.