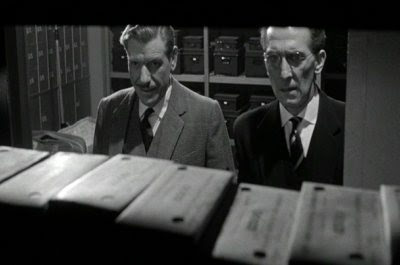 Peter Cushing stars as a stuffy manager of a small town bank in Cash on Demand another early pre-horror Hammer production. His life falls apart when a twinkly eyed Colonel arrives under the ruse of checking the bank's security procedures but is actually a bank robber who has kidnapped Cushing's wife and daughter. The cast is pretty strong but Cushing's performance as the pompous pedant under pressure lifts this tense little thriller into something special. A neglected gem.

Billy Wilder's able direction and witty script for the brilliant Five Graves to Cairo makes me wonder why it's never had a DVD release here. A British corporal stumbles from the desert into an Egyptian town the Allies have abandoned only to find Rommel and his chums right behind him. Disguising himself as a waiter in the ramshackle hotel our hero tries to stay alive and uncover the secret of Rommel's success and the mysterious five graves. A brilliant, funny thriller that romps along with some excellent performances throughout.