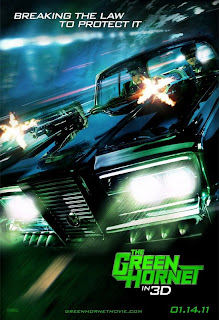 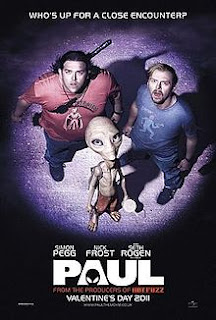 Michel Gondry sucks in his strangeness while directing The Green Hornet - a reimagining of the TV show that brought Bruce Lee to the world's attention. Seth Rogen wrote the script and stars, unsuccessfully, as the playboy who takes up vigilantism after his industrialist Pa dies and he inherits the $ and his Pa's former coffee, kung fu & cars man servant Kato. It's not terrible, there's a few good lines & some touches of visual flair as the duo smash and crash about the city but it's so unremarkable and bland its hard to remember much about it after just 24 hrs. A waste of the not inconsiderable talents involved.

Paul is a fairly colossal cloud of guff - SOTD was funny and Hot Fuzz less so but still quite charming. Paul on the other hand has minimal charm and relies almost soley on dick/fart/pot jokes and unsubtle geek references for it's laughs. Two nerds pick up a foul mouthed alien after leaving comic con and get involved in a Starman-ripoff romp across the States to help him meet his Mothership. It does have it's moments but it's so unoriginal and the jokes so tawdry I was increasingly depressed and frankly a bit embarrassed by the end. Pegg and Frost need to extract themselves from the Hollywood machine before their talents are completely sanitised.
Posted by Doc.Dunce at 07:54