William Wyler's assured adaptation of The Collector succeeds mainly due to the talents of a young Terence Stamp. It follows the novel's plot pretty closely but they've had to excise the portions narrated by his victim so it's unsurprising that Stamp's unnerving performance of the disturbed, kidnapping entomologist dominates the proceedings, that's not to say Eggar's isn't good too, she handles her slightly reduced (& imo enfeebled) role with aplomb. I knew Wyler directed Roman Holiday and Ben Hur but I must have a dig around and see what else he done did. A chilling classic that needs more attention.


I like a bit of Korean cinema now and again and I Saw The Devil is another example of the stunning thrillers that they've been producing. A practised sex killer offs the pregnant fiance of a secret agent and unwittingly initiates a brutal cat and mouse game between the two. It's startlingly violent in parts and the cool calculated attitude of both heighten the merciless atmosphere but despite all the gore and blood letting there's still an intelligent, well acted thriller underneath that gives itself plenty of time to brood over the costs of revenge. An intense film that makes Oldboy look fluffy.

Psych 9 is a half hearted, hokey load of codswallop, purportedly a horror thriller about a troubled temp who takes a night-shift filing job in a mothballed hospital but finds herself losing her noggin after reading too many of the files oh and there's a lady killer on the loose. There's a fair effort in building some tension but it's constantly punctured by the crappy script, poor acting and contradictory plot turns and the whole thing just descends into a puerile guessing game. Only the appearance of Michael Biehn kept me watching to the end so to be honest so I'd give it a miss. 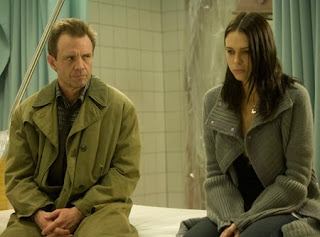