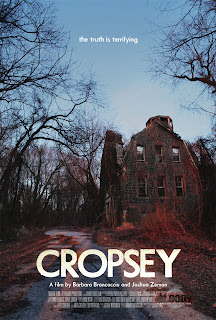 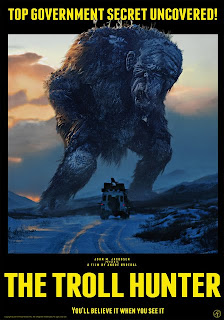 The intersection between true crimes and urban myths are explored in the documentary Cropsey. Two Staten Island filmmakers start investigating the truth behind the local legends of a child snatcher that surround an abandoned mental asylum and soon uncover a complicated, tragic history at the very heart of their neighborhood. It's a decent film, well made with plenty of face time with key individuals but they failed to get the one interview that would tie the whole thing together so by the end it all seemed a little fruitless and more like a special on Crime & Investigation.

The Troll Hunter is a cracking Norwegian found footage flick about some documentarians who try to make a film about rogue bear hunters but discover far more deadly, mythological predators in the wilds of Norway. It's great fun with some nice creature effects and a well thought out mythos that's gradually unfolded as the filmmakers dig deeper into their government's secret Troll management scheme. These found footage films rely on poorly lit, shaky cam action to build the tension and it does get a bit tiresome but the film's quality pushes through and it's well worth a watch. There's plenty more juice in Trolling so I hope they make a sequel, shit I'll probably be happy with a prequel.