Winter's Bone is a quietly brilliant thriller about a daughter searching for an errant father who's put the family home up as bail bond. Though the plot is pretty slim it's a well crafted, tense film that relies on the quality of the acting instead of explosions and familiar faces. The bleak naturalism reminded me of Frozen another rural thriller with a female dominated cast. 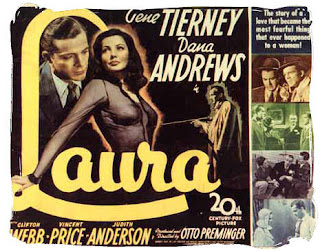 Otto Preminger's Laura is a classic film noir about a detective who becomes obsessed with a murder vic during his investigations only for her to walk through door a few days later. With a stellar cast including Clifton Webb, Gene Tierney and Vincent Price this finely scripted melodrama lives up to it's reputation.
Posted by Doc.Dunce at 21:24